"The Trial of Fallen Angels" takes you - somewhere

NUEVO VALLARTA, Nayarit, Mexico - The Trial of Fallen Angels by James Kimmel Jr. is a remarkable book from two directions. First, it is well-written and easy to read. Second, it is his first novel.

I have wailed in this space about first novels before - usually that they don't have the snap that later work does for most novelists. But Trial reads as quickly as a detective novel, though the plot will weigh heavy in most reader's hearts.

The book is about dead people. Well, no, wait. Dead people isn't the right way to say it. Perhaps souls in transit would be better.

These souls are headed towards heaven, or somewhere else, and all are caught up in an ecclesiastical judicial system. No, there aren't practicing lawyers in heaven (we can hope). But then this book doesn't take place in heaven. 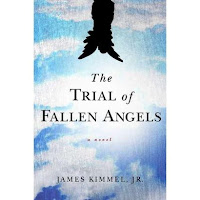 Trial is set in an otherworldly locale where things, as you might guess, are never exactly what they seem. And people's motives, sins, and intentions are never as simple as we still on earth would like them to be.

The Trial of Fallen Angels has plenty of twists and turns, too, making it close to a page turner.

Just don't read it right before you go sleep. The dreams I had for several nights running were pretty spooky.

No, make that really spooky.


Posted by Michael J. Fitzgerald at 6:39 AM No comments: