WATKINS GLEN, New York, USA - The film Living Downstream, based on the award-winning book by the same name, will be the feature attraction at the Glen Theater here Tuesday night. And like a Hollywood movie premiere (even though the film was released in 2010) there will be food and wine provided by Red Newt Winery and Glenora cellars.

I might have to drag out the tuxedo for this event.

The movie starts at 7 p.m. and is sponsored by Gas Free Seneca, Finger Lakes Bioneers, and the Sierra Club (Finger Lakes Chapter).

The film is the story of Sandra Steingraber, a cancer survivor who is "working to break the silence about cancer and its environmental links."

It's an eloquent statement, according to every review I read.


And in the film, she makes a strong case that we all should become "cancer abolitionists."

In the meantime, here's the trailer for the film.

WARNING: Even the trailer can give you chills.

Posted by Michael J. Fitzgerald at 6:20 AM No comments:

GUYANA, South America - Just the title, "Wild Coast: Travels on South America's Untamed Edge" is good enough to make most people want to reach to grab this book from the shelf. And so in the tiny Watkins Glen, New York library, I did just that last week, picking up this tome by John Gimlette, a veteran traveler and an author with plenty of wit.

"Wild Coast" was hard to get into at first.  Then suddenly interesting gave way to fascinating as he progresses across Guyana to Surinam to French Guiana, detailing out the rugged life there and revealing a history that alternately makes readers want to laugh or cry. He quotes from the works of Sir Walter Raleigh, looks at the history of slavery in the area and walks readers through the various revolutions, upheavals and events that shaped what's left for travelers to see in the 21st century.

The section on Jonestown - where the Oakland, Calif.-based Peoples' Temple mass suicide/massacre happened in November 1978 - was particularly compelling for me.

I lived in Northern California when that all took place and watched in horror from a distance.

And to this day, when people say that someone 'drank the Kool-aid' they mean someone has swallowed a line of dangerous bullshit. For the hundreds of people at the Peoples' Temple in the jungle, the Kool-aid drinks ended in their deaths. 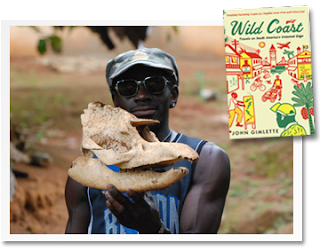 The whole thing still makes me wince, though the author reveals some details about the event that I didn't know. Yes, you will have to read it yourself to see some of the nuance of what I think major media missed.

Gimlette's book is a first-person account as he travels by dugout canoe, on foot, by steamer, aboard a tugboat and sometimes in strange cars with even stranger people. Yet the character of the jungles and rivers of these nation-states rival the people he meets as he researches the book. It's hard to read parts of Wild Coast without breaking out in a sympathetic humidity-drenched sweat.

This is no armchair travelogue trying to convince you to take a vacation. Only the most neurotic of travelers would read any of this and think, 'Gee, let's pack and bag and head off to Surinam for the weekend.'

Still, a part of me read this book and wants to tour these great rivers, meet the people and see the historical sites he did - even if they are in tatters or barely there.

As I read about the caimans, the snakes, the oily water and piranha-like fish, I kept thinking of the late gapped-tooth British actor Terry Thomas, whose character in a film talked about traveling in Africa along 'the great gray-green greasy Zambezi.'

He would have been quite at home in a movie based on Wild Coast.

A triple-bypass burger on the way to the hospital?

WATKINS GLEN, New York, USA - Since December, my wife and I have made a decided attempt at cleaning up our diets.

We read Live Longer Now and The China Study, plus we started paying attention to a lot of other food and health-related data that we have been ignoring for years.

The result? Well, we feel better, still drink wine (any diet that cuts out vino is off my list) and have a very healthy (pun intended) suspicion of the industrial-food complex.

But there are some stories and things that are just so nuts, they defy credulity.
This particular hamburger is served at a restaurant at which the servers wear nurses uniforms, if you weigh more than 350 lbs. your food is free and the restaurants 600-pound spokesman died last year - at 29.

It is no wonder I struggle writing fiction. The truth is so weird, how can I make anything up?

Here is a link to the full story: Want some animal fat with that?

And here is more on the restaurant: 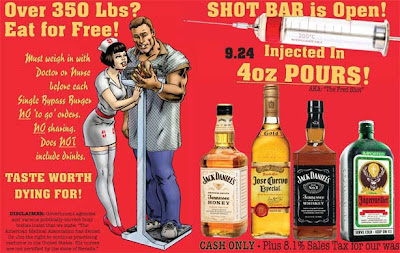 SENECA LAKE, New York, USA - A project to store propane (and eventually natural gas) in salt caverns alongside and below Seneca Lake is making an ugly industrial mess on the shore of the lake, just a few miles north of Watkins Glen in the Town of Reading.

The project is actively opposed by thousands of area people and businesses. An application is currently under consideration by the NY State Department of Environmental Conservation.

While the application works it way through the system, however, Inergy (and its wholly owned subsidiary U.S. Salt) have been busy, carving up a huge swath of the Seneca Lake shoreline and creating an industrial mess that looks more like something from a Mad Max movie (Mad Max's World of Industry) than the sylvan shores people expect to see in the beautiful Finger Lakes.

The four aerial photos below show how far along the project is. The Inergy company has gone to great lengths claiming this is just business as usual, similar to earlier local efforts to store lesser amounts of propane in the salt caverns.

It is not. This is a huge expansion as the photos show.

And the Quantitative Risk Assessment done last fall - paid for by Inergy - is being kept under wraps by the company. Inquiring minds would like to know what that risk assessment says.

If the project is approved by the DEC and the Town of Reading, people of the area will have to worry about possible propane explosions, fires, heavy truck traffic, railroad tanker car accidents, brine pond spills into the lake, possible earthquakes and a host of other pollution problems still under study.

And the Inergy firm has made it clear in various SEC filings that if it all goes sideways (as in some of the scenarios listed) it might not have the resources to pay for the devastation, cleanup and the various legal claims that would be forthcoming.

These photos of the site on the west side of Seneca Lake were all taken by Gas Free Seneca. 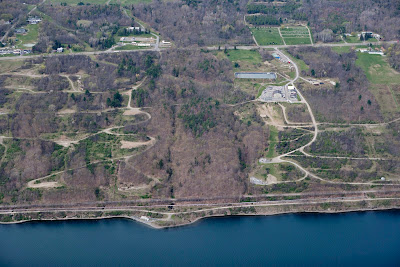 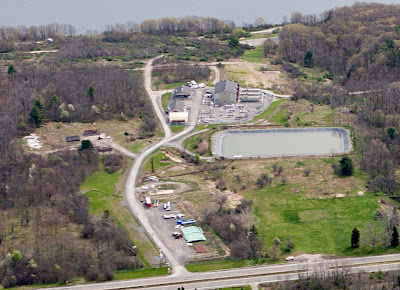 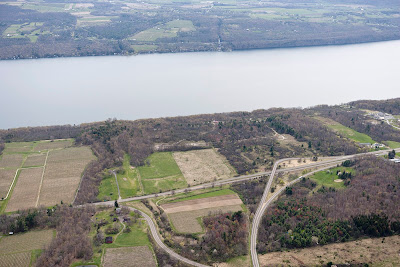 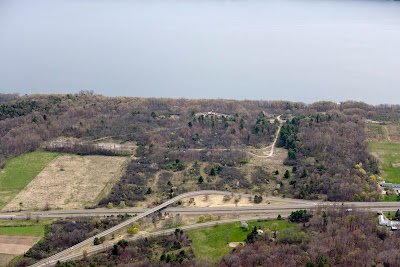