This comprehsive study of the American military is also one of the most depressing books I have read in awhile. 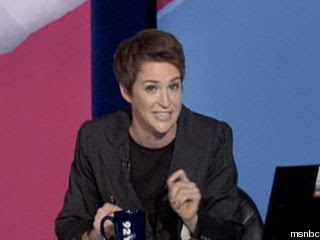 Maddow traces the history of the U.S. military from the beginnings of the nation right up to today. And she does so with the same touches of snarky humor that are the hallmark of her television show on MSNBC, even when she exposes some horrific military problems and costs.

In describing the nuclear weapons the United States has lost over the years - yes, you read that correctly, lost - she offers the following:

"There obviously was not a nuclear blast in Spain in 1966, but these two nuclear bombs did explode. There were essentially massive dirty bombs. The conventional explosives that form part of the fuse in these nukes blew the bombs apart and scattered radioactive particles and bomb fragments all over Palomares, Spain. Whoopsie!" (page 228)

Whoopsie indeed. The U.S. continues to pay the people of Palomares for that whoopsie, by the way, sending everyone to Madrid for expensive health checkups to see what their radioactivity levels are. Oh, and a few years ago, $2 million of your tax dollars went for some soil cleanup so a condo project could be built where the soil was still radioactive.

Maddow's research seems very sound (her endnotes list sources). And much of what she writes about is drawn directly from various declassified public documents. 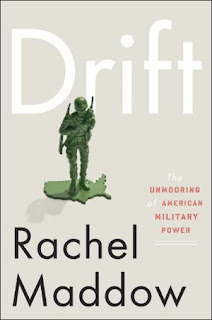 Two major things I can't get over.

First, she details how GOP icon and saint-in-waiting Ronald Reagan was a disaster when it came to military issues. And it is also clear his Alzheimer's was likely raging long before he left the White House.

Two, any of the much-wailed-about shortages of money citizens are getting pummeled with in this election - Medicare, Social Security, food stamps, education, health care, just to name a few - can be laid directly at the foot of the unbelievable amounts of money thrown at the U.S. military and legions of private contractors. She does a great job of documenting the money and that some military people are getting more money than they know how to spend.

By the way, this might keep you awake tonight: A good-sized portion of the killing being done in the name of the people of the United States of America, is being done by private companies. Drones dropping bombs on villages in Afghanistan and Pakistan are being flown by mercenaries in the employ of U.S. companies.

And those mercenaries are immune from the laws of the U.S. and the countries where they are dropping bombs. They have also been caught doing quite a few other, arguably criminal, things (human trafficking) that they get away with because of that immunity.

Read the book, it's all documented.