VALOIS, New York, USA - Early in my teaching career at CSU, Sacramento, I made the acquaintance of a firebrand five years my senior, a fellow named Jeff Lustig.

He was running an outfit called the Center for California Studies and was tangling assholes with then-CSUS president Donald Gerth. Jeff was feisty but fair and didn't believe in the academic nice-talk that generally required deference to presidents and top administrators.

His feet hurt a lot, but he brought about many positive changes and was an astute scholar.


When he was forced out of the Center for California Studies, the California Faculty Association (a faculty union) was the big winner. He took over the local chapter of the union as president and tore into the central CSU administration so effectively that he helped win substantial salary increases and betterment of working conditions for all faculty.

The chancellor of the CSU was afraid of Jeff - high praise because Chancellor Charles Reed (who is finally retiring this year) stared down governors and legislators alike.

In our last joint effort, Jeff helped the faculty at CSU, Sacramento in an attempt to censure the president of the campus whose priorities were more in the direction of public relations (and promoting his image) than academics.

I was president of the faculty senate that year and every time I felt my knees buckling under the pressure of the tumult, Jeff offered words of encouragement to keep fighting for what was right.

He will be missed.

- Posted using BlogPress from my iPad

Location:Amigo Jeff Lustig dies at 69
Posted by Michael J. Fitzgerald at 6:59 AM No comments:

'Three Months' a book of hearts and minds


VALOIS, New York, USA - I have been carrying around a book titled 'Three Months: A Caregiving Journey from Heartbreak to Healing' for weeks, reading it in fits and starts. 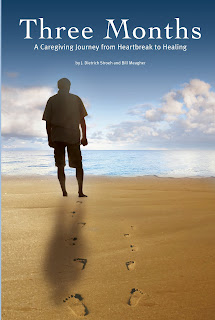 It's not that it is a difficult book to read, exactly. It's that it is about the death of woman from pancreatic cancer and how her husband and family took care of her during her final months. But beyond that, a former student was a consultant and eventually co-author for the project, and so I read the book with a different eye than most readers.

Both of these things made looking at this book harder than picking up some bestseller off the library shelf.

The pancreatic cancer side of the equation brought up some very unpleasant memories about the death of my mother from cancer many years ago.

But J. Dietrich Stroeh (whose wife Margaret died of pancreatic cancer) and my former student (Bill Meagher) got me laughing hard in a few spots - a definite plus in a book that could send you reaching for the scotch (Stoeh's alcohol of choice in parts of this memoir).

One medical episode recounted in 'Three Months' reminded me how my mother's doctor told me he was concerned about her sometimes having a Manhattan cocktail as early as 10 or 11 a.m. in the final months of her life. The same doctor - who knew she had at best months to live because of her  fast-moving cancer - said he didn't want to give her too much pain medicine.

You can't make this stuff up. Honestly.

'Three Months' is a very sad story but one that offers good advice to anyone going through the sudden onset of cancer in a loved one.

And while that part was interesting - and a scenario I hope never face - it was equally interesting to try and tease out where my former student (and now amigo) had his voice come through.

It was hard. But even 25 years since looking at Bill from a university lectern, there were segments I thought that might be pure Bill Meagher.

If I were still a journalism professor, I would have Bill come into my classes and explain exactly what he went through to make this book happen. I bet that would be a story worth hearing.

'Three Months' is a slim volume - just over 100 pages and might even be available electronically via Kindle or iPad by now.

It's one more thing my friend, former student and ghost-writer-turned co-author said he had to do.

Posted by Michael J. Fitzgerald at 3:20 PM No comments: