PINE CREEK VALLEY, PA, USA - All of the reports about the gas company-imposed disaster that is known as hydrofracking talk about traffic, but most seem more worried about potential water pollution.

And we should be worried about water pollution. If we don't have clean water, well, it's game over amigos. 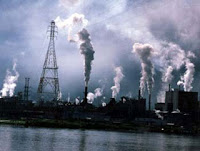 The video below shows the impact of traffic in a small town. And, as noted by the narrator, this is just the beginning of a huge gas company push to put in thousands (maybe hundreds of thousands) of gas wells.

Fracking is going to create an industrial nightmare that made the Mad Max movies look like Disney productions.

Posted by Michael J. Fitzgerald at 9:34 AM No comments:

Rick Perry prays for the nation - and to be president

If he were a minister who got lucky and scored $500,000 from the whack-job American Family Association (founded by Donald Wildmon), it would be one thing.

But this guy is within days of throwing his 10-gallon hat into the ring for the GOP nomination, joining Mitt Romney and Michele Bachmann, among others.

Shameless politics, no matter how much he protests.

So what's political about praying for a "nation in crisis" as he says the prayer rally is all about?

Well, the nation is in a crisis of sorts. First, the GOP manufactured a crisis out of raising the debt ceiling then used it to cudgel Democrats and the President into accepting completely unacceptable budget cuts. And there's little doubt that we should say a few prayers that politicians start thinking about what's best for the people of America and not their future political careers.

But look at Perry's stated goal:

"We're going to pray for the president of the United States, to have God's wisdom poured out over him, to have his eyes opened," Perry said.

Opened to what? Perry should be careful what he wishes for.

If he opens his eyes, maybe, just maybe, he will stop caving in to the Tea Party wing nuts who are intent on dismantling all government.

That's my prayer anyway. But I am not going to Texas to offer it up.